I wrote this post before watchOS 2, when optimizing traffic to the Watch was essential. Although this is no longer necessary, the approach presented here is still very useful for other reasons, so keep reading!

In this post, I will show you how to dramatically simplify the architecture of your WatchKit application and improve its performance. We will introduce a thin layer between your interface controller and the views (tables, rows, labels, images…). Together with a small set of additions to the WatchKit framework, this will free you from worrying about updating your UI in an efficient manner. Every time your data changes, you will simply tell the framework what you want to display, and the framework will intelligently compute the smallest required set of interface changes for you. 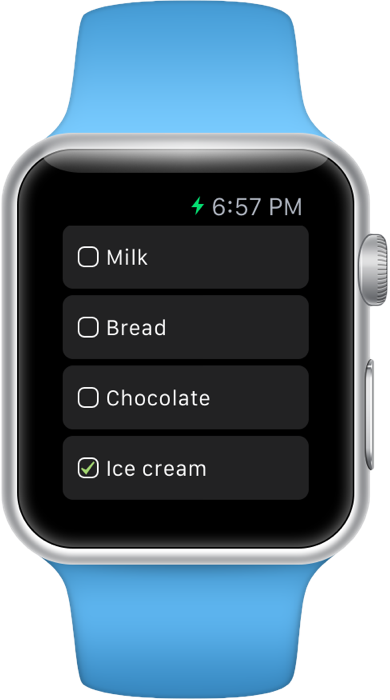 To illustrate the concepts in this article, we’ll make a very simple app — a shopping list. We’ll display it as a table, each row with a name and a checkbox to indicate if the item was purchased. We’ll model those items as a struct:

For the sake of argument, let’s pretend shopping items have some additional properties that aren’t displayed on the list, but would be useful somewhere else. You’ll see why later.

As you know, WatchKit apps are constructed in a very peculiar way — they’re executed on an iPhone, not the watch. All of the UI changes must be sent over the radio, with significant latency and bandwidth limitations. To achieve reasonable performance, we have to minimize traffic between the phone and the watch.

Unfortunately, the WatchKit framework doesn’t help us very much with this. Interface objects are write-only, and don’t know about the state of views they represent. So if we try to update a table with the exact same data it displays, all rows will be updated, wasting precious bandwidth.

We have to add our own layer between the interface controller and the views to remember the displayed state and only send updates to the Watch if anything changed.

The basis for it is provided by view models and updatable interface objects. Those concepts have been explained very well in Reducing WatchKit Traffic With View Models by Robin Senior. If you haven’t read that article, I urge you to read it before continuing. (It’s okay, I’ll wait.)

To aid us with updating UI elements, we’ll define some helpers on WatchKit classes, like this:

(It would be best if these objects simply remembered their own state, but this is harder to do well than it seems.)

We’d like to update whole rows in a similar way, but we first need a data type to describe them. For that purpose we’ll define a view model:

Why not just use ShoppingItem? You could. But when the view only displays a subset of model’s data, it might make sense to encapsulate it into a separate type. This way, if the view models don’t change, we know the rows themselves don’t have to change, either.

Another reason to make a new type is when your existing model layer is built using classes, not structs. We really want view models to have value semantics.

(What is a view model? It’s a value (a model) that describes a piece of user interface (a view). Mystery solved!)

We can now make our table rows updatable easily:

Notice an interesting thing that happens with the checkbox image. We map the completion flags to checkbox image names, but when we’re setting up a table row for the first time (old is nil), we default the image name to “checkbox”, because that’s what’s set up in Interface Builder. This way, when we display a new row with an uncompleted shopping item, we get the right checkbox image for free.

Instead of naively resetting the table by calling setNumberOfRows, and updating each row directly, we can now update tables more efficiently, like this:

We added one item, completed another one, and the system did the right thing: only updated what actually changed.

What I’ve described above is a great technique. We can update our table every time there might be some new data, and if there are no changes, we don’t have to worry about it — no bandwidth will be wasted.

The technique is efficient when we change properties of existing rows, or when we add or remove rows from the end of the table. But it’s disappointing whenever the order of rows changes, or when rows are added/removed in the middle of the table. Take a look at what happens when we move the last item to the very top:

Even though all of the data was already sitting in our table, we had to set up everything from scratch. Ugh.

For the human eye, it’s pretty obvious what should have been done in this scenario: “Cookies” should be removed from the list, and then inserted at the beginning. (You can’t reorder table rows in WatchKit.) Everything else should stay unchanged.

Doing this automatically isn’t as simple as it sounds. We need some sort of a diffing algorithm to figure out how we can go from old to new rows in the smallest possible number of steps.

Let’s define our problem a bit more precisely. Given two arrays, old and new, we want to calculate the smallest possible set of insertions and deletions necessary to align as many elements from both arrays as possible.

What we want to determine first is the longest common subsequence — the largest possible set of elements that exist in both arrays in the same order (not necessarily all next to each other).

Then, we can iterate over elements of the LCS, check for their positions in old and new arrays, and remove or insert rows to align them.

And when I say “align”, I mean we want the common elements to be at the same indexes in both the old array after insertions/deletions are applied, and the new array.

What we don’t care about is elements that are different, but don’t interfere with the alignment of common elements. In the illustration above, “Chocolate” was removed from the list, but “Mayo” was added at the same spot (between the same two common elements). We don’t have to remove that row and then insert a new one in the sample place to achieve our result — we can simply call update on a row to replace displayed shopping item.

In other words, we want to calculate optimal insertions and deletions, but we don’t care about substitutions.

With the diffing algorithm in our toolbelt, we can implement diffing-based table updating quite easily:

First, we diff the old and new arrays. Here I’m comparing them by the IDs of objects (shopping items) the view models represent. That’s partly for speed, partly because I want to maintain the logical relationship between rows and the underlying data. (You could, in essence, diff by the actual view models as long as they’re Equatable.)

Then, I’m applying insertions and deletions to the table, as well as to the old array (so that it continues to represent the displayed state).

Finally, I’m enumerating over the old and new view models and updating each row. Voilà!

Here’s an illustration of how this works in practice:

As you can see, the algorithm did the right thing — it moved “Cookies” to the top, and changed “Chocolate” to “Mayo” without sending any updates to other rows.

Before we finish, let’s just spice up our code with generics, so we can move as much logic as we can to the framework layer.

First, we’ll define protocols for our updatable row controllers and the view models that describe them:

Our code can now conform to them:

What’s the purpose of all this? It allows us to add this method to WKInterfaceTable:

We can call it with a pair of ShoppingItemRowModel arrays, and the table will figure out the rest for us. If it needs to insert rows, it will check for T.tableRowType. When it retrieves row controllers, it will cast them to T.RowController. And because of the T.RowController.RowModel == T constraint, the compiler knows that row controller’s update method accepts our T view model.

Are you still hanging in there? Good, because the end result is encouraging. Our interface controller has been greatly simplified:

Think about this for a second. As far as the interface controller is concerned, its UI is a pure function of the shopping list data. The tricky logic of deciding how to go from the representation of UI to actual update commands has been delegated to the framework.

If your app allows users to manipulate presented data from the Watch, you no longer have to get your hands dirty trying to manually insert, remove or update the right table rows. Nor do you have to deal with the performance penalty of just updating the whole thing. It just works!

As a bonus, you can improve your performance even further by loading tables lazily, which I covered in a separate article: Lazy WatchKit tables. (Very easy to do if you use view model diffing)

Since I published this post, watchOS 2 came out, allowing apps to run directly on the Watch. You might conclude that this makes this post obsolete and there’s no reason to implement the view model-based architecture in your app. I believe this conclusion to be false.

The architectural benefits of this approach still apply. Treating the UI as a function of application state makes your code cleaner and easier to reason about. There’s more complexity under the hood, but the application code is easier to manage.

Some optimizations, like the update(...) helpers aren’t needed anymore, but the diffing algorithm is still very useful. Although conceived as a performance trick, it has a side effect of nicely animating row insertions and deletions without you having to do anything. This is pretty awesome when you have changing lists of things coming from the network.

Try it out with your app!

Either way, I hope you’ve enjoyed this article, and if you’re interested in implementing these ideas in your app, check out the GitHub repo with the demo app, diffing code and WatchKit framework extensions: DiffyTables.

If you have comments, complaints or ideas for improvement, please let me know on Twitter or make an issue on GitHub.

These things gave me the inspiration and knowledge to write this post: Reducing WatchKit Traffic With View Models, React, Longest common subsequence problem, An O(ND) Difference Algorithm and Its Variations