You’re an iOS developer. You’re excited about all the great new features iOS 10 brings, and you’re eager to implement them in your app. You want to start working on it right now so that you’re ready to ship on day one. But that’s still a few months away, and until then, you have to keep shipping new versions of your app every few weeks. Does that sound like you?

Of course, you can’t use Xcode 8 to compile your shipping app — it wouldn’t pass App Store validation. So you split your project into two branches, one stable, another for iOS 10 development…

And inevitably, it will suck. Branching works beautifully when merely working on a feature for a while. But try maintaining a huge branch for many months, with changes spread across the whole codebase, while the main branch also evolves, and you can brace yourself for some serious merging pains. I mean, have you ever tried to resolve .xcodeproj merge conflicts?

In this article, I will show you how to avoid branching altogether. For most apps, it should be possible to have a single project file that will compile for both iOS 9 (Xcode 7) and iOS 10 (Xcode 8). And even if you do end up branching, these tips will help you minimize the difference between your two branches, and make syncing them less painful.

Let me get this straight:

We’re all excited about Swift 3. It’s awesome, and if you’re reading this article, you shouldn’t be using it (yet). As great as it might be, it’s a huge source-incompatible change, much bigger than Swift 2 was a year ago. And if you have any Swift dependencies, they too need to upgrade to Swift 3 before your app can.

In case you missed the announcement, Swift 2.3 is the same language as Swift 2.2 in Xcode 7, but with some minor API changes (more on those later).

So! To maintain simultaneous compatibility, we’ll be using Swift 2.3.

But that much is likely obvious to you. Now let me show you how to actually configure your Xcode project so that it runs on both versions. 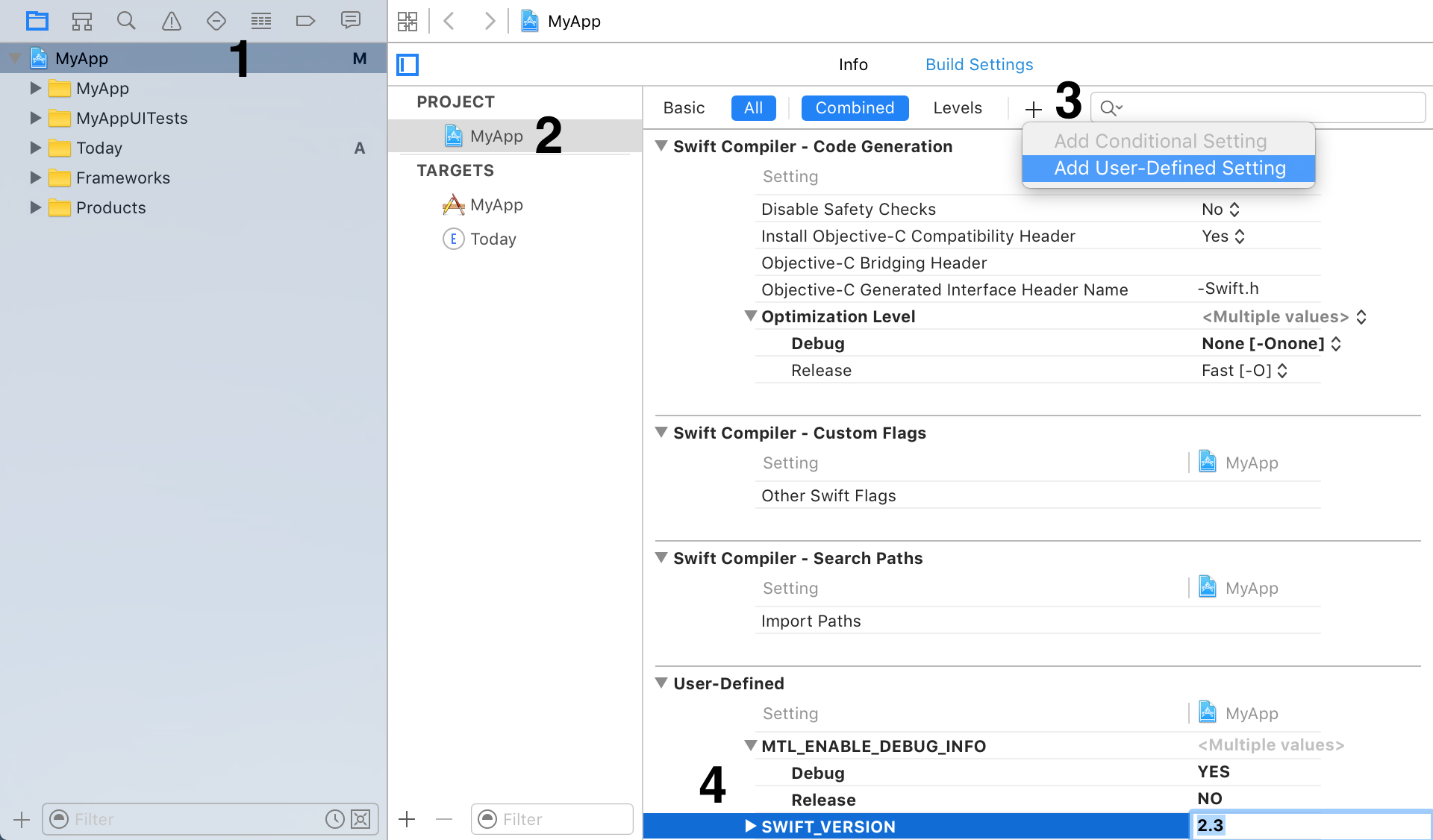 To begin, open your project in Xcode 7. Go to project settings, open the Build settings tab, and click the “+” to add a User-Defined Setting:

This option is new to Xcode 8, so while it will cause it to use Swift 2.3, Xcode 7 (which doesn’t actually have Swift 2.3) just ignores it completely and keeps building with Swift 2.2.

Xcode 8 makes some changes in how Framework provisioning works — they will continue to compile as-is for the simulator, but will fail to build for a device.

To fix this, go through Build Settings for all your Framework targets and add this option, like we did with SWIFT_VERSION:

Be sure to replace “ABCDEFGHIJ” with your Team ID (you can find it in Apple Developer Portal), and keep the forward slash at the end.

This essentially tells Xcode 8 “hey, I’m from this team, you take care of codesign, okay?”. And again, Xcode 7 will just ignore it, so you’re safe.

Go through all of your .xib and .storyboard files, open the right sidebar, go to the first (File inspector) tab, and find the “Opens in” setting.

It will most likely say “Default (7.0)”. Change it to “Xcode 7.0”. This will ensure that even if you touch the file in Xcode 8, it will only make changes that are backwards-compatible with Xcode 7.

I still suggest to be very careful about changing XIBs with Xcode 8. It will add metadata about the Xcode version (I can’t guarantee that this is stripped when you upload to App Store), and will sometimes try to revert the file to Xcode 8-only format (this is a bug). When possible, avoid touching interface files from Xcode 8, and when you have to, carefully review the diff, and only commit the lines you need.

Make sure that your project and all its targets have the “Base SDK” build setting set to “Latest iOS”. (This will almost surely be true, but worth double-checking.) This way, Xcode 7 will compile for iOS 9, but you can open the same project in Xcode 8 and work on iOS 10 features.

If you’re using CocoaPods, you also have to update the Pods project to have the right Swift and provisioning settings.

But instead of doing this manually, add this post-install hook to your Podfile:

Again, be sure to replace ABCDEFGHIJ with your Team ID. And then run pod install to regenerate the Pods project.

(If you find that a Pod is incompatible with Swift 2.3, and you need to pull it from a different branch for Xcode 8, Igor Palaguta wrote in to suggest a solution.)

Alright, it’s time: open the project with Xcode 8. The first time you do so, you will be bombarded with a lot of requests.

Xcode will urge you to upgrade to the new Swift. Decline.

Xcode will also suggest to update the project to “recommended settings”. Ignore this as well.

Remember, we already set up the project so it compiles on both versions. For now, it’s best to change as little as possible to keep simultaneous compatibility. And more importantly, we don’t want the .xcodeproj to contain any metadata about Xcode 8 while we use the same file to ship to the App Store.

Like I said before, Swift 2.3 is the same language as Swift 2.2. However, the iOS 10 SDK frameworks have updated their Swift annotations. I’m not talking about the Grand Renaming (that only applies to Swift 3) — still, the names, types, and optionality of many APIs are slightly different.

In case you missed it, Swift 2.2 introduced conditional compilation preprocessor macro. It’s straightforward to use:

Awesome! One file, no branching, simultaneous compatibility on two versions of Xcode.

Two caveats you need to be aware of:

In Swift 2.3, many signatures lost their unnecessary optionality, and some (such as many properties of NSURL) now became optional.

You could, of course, just use conditional compilation to deal with it, like:

But here’s a little helper you might find useful:

I know, it’s a little weird. Perhaps it will be easier to explain if you first see the result:

We’re taking advantage of Optional lifting to get rid of ugly conditional compilation at call site. See, what the optionalize() function does is it turns whatever you pass in into an Optional, unless it’s already an Optional, in which case, it just returns the argument as-is. This way, regardless if the url.resourceSpecifier is optional (Xcode 8) or not (Xcode 7), the “optionalized” version is always the same.

(To explain in more detail: in Swift, Foo can be considered a subtype of Foo?, since you can wrap any value of Foo in an Optional without loss of information. And since the compiler knows about this, it allows you to pass a non-optional in place of an optional argument — lifting Foo into Foo?.)

In Swift 2.3, a numer of functions (especially in the macOS SDK) have changed their argument types.

For example, the NSWindow initializer used to look like this:

Notice the type of styleMask. It used to be a loosely-typed Int (with the options imported as global constants), but in Xcode 8, it’s imported as a proper OptionSetType.

For example, to be a CALayer delegate, you just had to descend from NSObject, no need to declare conformance to CALayerDelegate. Indeed, the protocol didn’t even exist in Xcode 7. But it does now.

Again, the intuitive solution of conditionally compiling the class declaration line won’t work. But you can solve this by declaring your own dummy protocol on Swift 2.2, like so:

(Joe Groff points out that you can also typealias CALayerDelegate to Any — same result, but no overhead.)

By this point, your project should be able to compile on both Xcode 7 and Xcode 8 without any branching necessary. Awesome!

It’s time to actually build iOS 10 features now, and with all of the tips and tricks described above, this should be fairly straightforward. Still, here are some things you need to be aware of:

But the thing is, if you’re working on iOS 10, you probably want to make one of those new extensions for your app, not merely add more code to the app itself.

That’s tricky. We can conditionally compile our code, but there’s no such thing as a “conditional target”.

The good news is that Xcode 7 won’t complain about those targets as long as it doesn’t have to actually compile them. (Yes, it might issue a warning that the project contains a target configured to deploy on a higher version of iOS than the base SDK, but that’s not a big deal.)

So here’s the idea: keep the target and its code everywhere, but conditionally remove it from the “Target Dependencies” and “Embed App Extensions” build phases of the app target.

How to do this? The best approach I came up with is to have the app extension disabled from build by default for Xcode 7 compatibility. And only while you’re working with Xcode 8, re-add the extensions temporarily, but never actually commit the change.

If doing this manually sounds fickle (not to mention incompatible with CI and automated builds), don’t worry, I made a script for you!

Before comitting any changes in the Xcode project, remove iOS 10-only app extensions from the app target:

And to work with Xcode 8, add them back:

You can put this your script/, use it with Xcode build pre-actions, with Git pre-commit hooks, or integrate it with your CI or automated build system. (More info about the tool on GitHub)

One final note about iOS 10 app extensions: Xcode templates for those will generate Swift 3, not Swift 2.3 code. This won’t actually work, so make sure to set the app extension’s “Use Legacy Swift Language Version” build setting to “Yes”, and rewrite the code to Swift 2.3.

Once September hits and iOS 10 is out, it’s time to drop Xcode 7 support and clean up your project!

I made a little checklist for you (be sure to bookmark it for future reference):